Warner Music Group (NASDAQ:WMG – Get Rating) is scheduled to post its quarterly earnings results before the market opens on Tuesday, August 9th. Analysts expect Warner Music Group to post earnings of $0.19 per share for the quarter. Individual that are interested in participating in the company’s earnings conference call can do so using this link.

Warner Music Group (NASDAQ:WMG – Get Rating) last released its quarterly earnings results on Tuesday, May 10th. The company reported $0.18 earnings per share (EPS) for the quarter, missing the consensus estimate of $0.21 by ($0.03). The firm had revenue of $1.38 billion during the quarter, compared to analyst estimates of $1.37 billion. Warner Music Group had a net margin of 6.45% and a return on equity of 362.14%. The business’s revenue for the quarter was up 10.1% compared to the same quarter last year. During the same period in the prior year, the business earned $0.22 EPS. On average, analysts expect Warner Music Group to post $1 EPS for the current fiscal year and $1 EPS for the next fiscal year.

The firm also recently declared a quarterly dividend, which was paid on Wednesday, June 1st. Shareholders of record on Monday, May 23rd were given a dividend of $0.15 per share. This represents a $0.60 dividend on an annualized basis and a yield of 1.90%. The ex-dividend date of this dividend was Friday, May 20th. Warner Music Group’s dividend payout ratio (DPR) is presently 84.51%.

Warner Music Group Corp. operates as a music entertainment company in the United States, the United Kingdom, Germany, and internationally. The company operates through Recorded Music and Music Publishing segments. The Recorded Music segment is involved in the discovery and development of recording artists, as well as related marketing, promotion, distribution, sale, and licensing of music created by such recording artists; markets its music catalog through compilations and reissuances of previously released music and video titles, as well as previously unreleased materials; and conducts its operation primarily through a collection of record labels, such as Warner Records and Atlantic Records, as well as Asylum, Big Beat, Canvasback, East West, Erato, FFRR, Fueled by Ramen, Nonesuch, Parlophone, Reprise, Roadrunner, Sire, Spinnin’ Records, Warner Classics, and Warner Music Nashville. 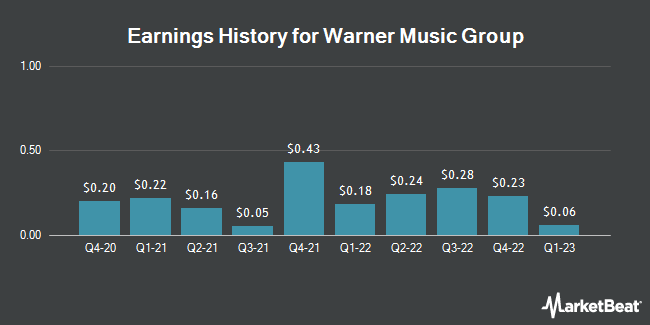